The Secret is out: that big fat diet menace is back by Katharine Child

Authorities go after the makers of a weight-loss product (Secret Fat Burner) containing a banned substance, in a case that echoes a 2010 scandal

The distributors of a new “miracle” diet product, which contains  very similar ingredients to the Simply Slim products that were banned eight years ago, have been forced to cease sales pending a meeting with the Health Department’s law enforcement officials on Monday.

All distributors of the weight-loss product, the Secret Fat Burner, have been instructed to stop selling it – but its promotional articles insist the real culprits are those behind a rip-off of the original product, which bears close resemblances to what Simply Slim distributors said when their product was pulled off the shelves in 2010.

It is still not known who is manufacturing the Secret Fat Burner, a R640 weight-loss product sold on the Internet that  contains the illegal ingredient, sibutramine.

Sibutramine  was banned in Europe in 2010 after a study found 5,000 people using it for weight loss were more at risk of heart attack, stroke or death than the 5,000 given a placebo.

Doctors from The Society for Endocrinology, Metabolism and Diabetes had the Secret Fat Burner tested after patients using it had to be admitted to hospital with severe complications including irregular heartbeat.

It warned that using The Secret Fat Burner could cause life-threatening complications.

Now authorities are trying to trace the manufacturers of what is nicknamed “the Secret”. 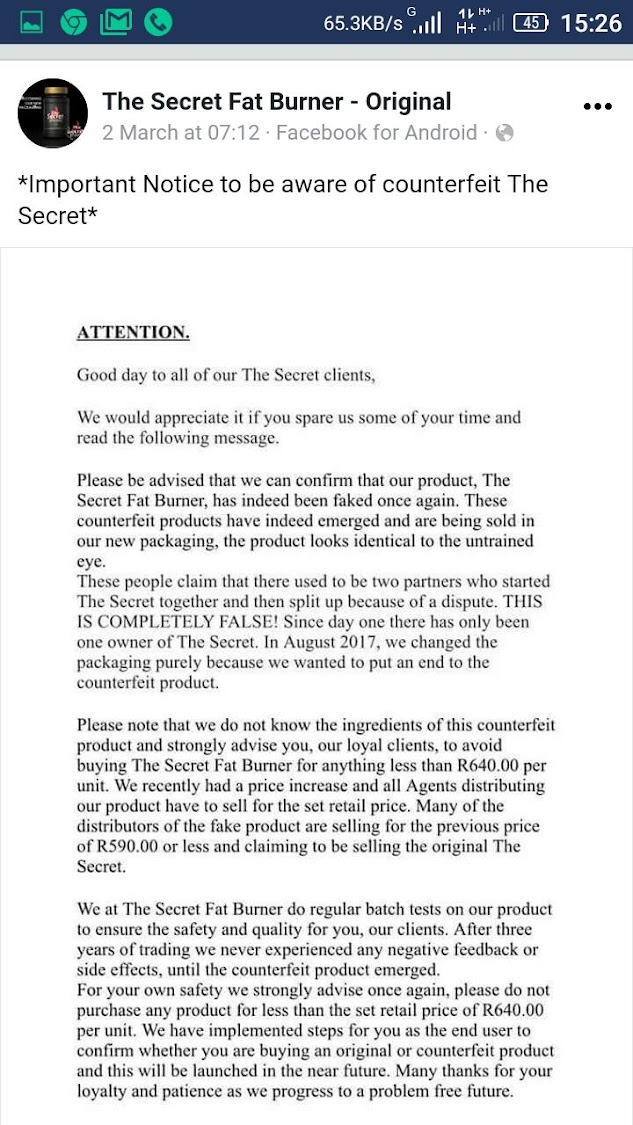 The SA Health Products Regulatory Authority ( formerly the Medicines Control Council) told Times Select the “law enforcement department is working with the police to identify the distributors and manufacturers of this product”.

A meeting between senior staff members at the authority and two distributors of the product is to be held on Monday.

In the meantime, an e-mail from “the Secret Team” has been sent to “all Secret Fat burner agents” to stop selling the product until the meeting is completed.

It states: “Our product, the Secret, is being investigated by the department of health because of recent issues with counterfeit products. We are co-operating with the department to solve these issues and urgently request that sale of the Secret Fat Burner be halted until after our meeting on Monday morning … ” 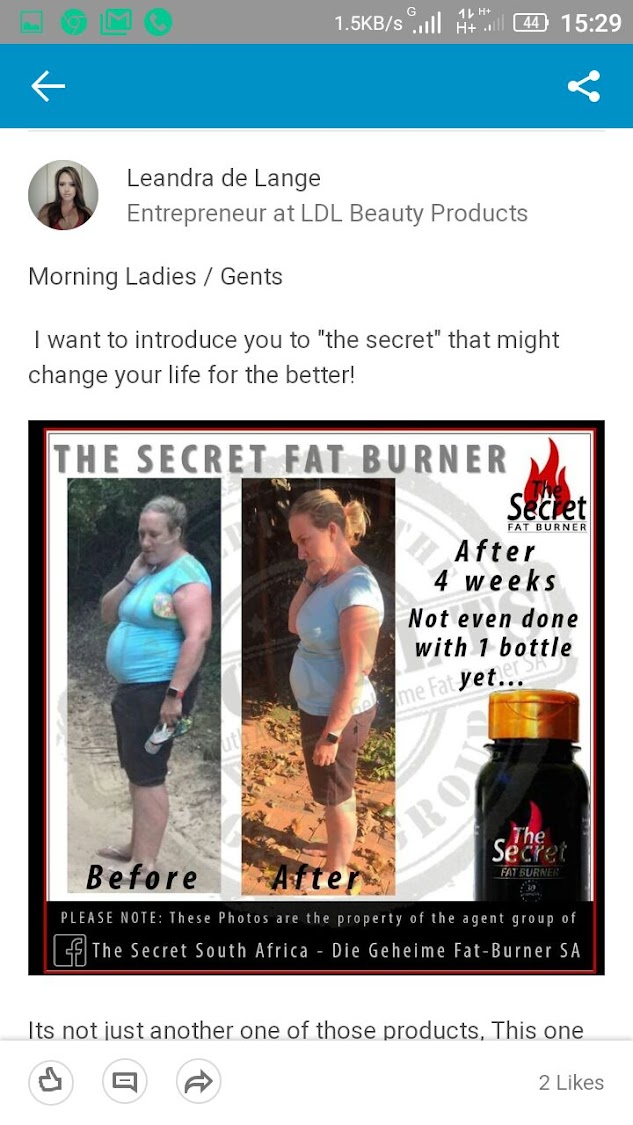 ‘Before’ and ‘after’ pictures doing the rounds on social media.
Image: Facebook

Three distributors, contacted by a Times Select journalist posing as a consumer, also said they couldn’t sell the product until after Monday.

Distributors have claimed that the Secret product linked to heart problems is not the original product but a fake version.

Distributor for the product Dean Fusco said: “I know that issues have arisen due to the fact counterfeits of the Secret are making people sick. To my knowledge the original product has never made anyone sick.”

Van Tonder referred further queries to an e-mail attached to the Secret head office, but refused to say who worked at that office.

The scandal is very similar to one in 2010 when used-car salesman Dirk Uys, his then girlfriend Mariesa Troskie (now wife) and a Marius Venter sold Simply Slim, a weightloss product with sibutramine. It also caused heart problems.

When  people taking Simply Slim become ill, Uys and his partners said it was a fake product making people sick.

The similarities don’t end there. Many of the ingredients of Secret Fat Burner are the same as Simply Slim.

When  people taking Simply Slim become ill, Uys
and his partners said it was a fake product making people sick.

The symptoms of the product are also similar.

“It felt like my heart was beating out of my chest,” a user told Wendy Knowler last week.

A 2010 Beeld report by journalist Antoinette Pienaar explained the symptoms a Simply Slim user experienced: “It felt as if someone sat on my chest and squeezed my heart in his fist.”

There are also links between those involved in the Simply Slim scandal and sellers of the Secret Fat Burner.

Mariesa Uys remains the registered owner of the Simply Slim business that was banned in 2010.

Times Select established that Mariesa and her husband, Dirk Uys, who were behind the Simply Slim scandal, are Facebook friends with confirmed and current Secret Fat Burner distributor Dean Fusco.

A WhatsApp message sent to distributors of the product on Thursday describes the manufacturer as a ‘Dirk’, with no surname.

A WhatsApp message sent to distributors of the product on Thursday describes the manufacturer as a “Dirk”, with no surname.

Asked to comment on any links with Simply Slim, Fusco refused to say anything.

Uys, and his wife Mariesa, did not reply to e-mails sent to them.

When the Times Select reporter tried to find out who worked in the Secret head office, they were told to e-mail an Edwin Roos at a Gmail address. No replies were received.

The journalist could  find no evidence of a person by that name registering a weight-loss business.

When asked who Dirk was, distributor Angeline van Tonder became extremely agitated and said the person in charge of the company was Edwin Roos. She declined to give further details.

Besides the product being banned, no known action has been taken against the Simply Slim directors.

5 Responses to The Secret is out: that big fat diet menace is back