REVIV, an international company which has opened its doors in Sandton, offers intravenous ‘treatment’ for a range of ‘conditions’. For example, “HYDROMAX rebalances your body with fluids fortified with electrolytes and antioxidants to maximize athletic performance”, “MEGABOOST restores your body with minerals, different anti-oxidants, electrolytes to bring your body back into equilibrium, maximizing your productivity, leaving you feeling healthy and refreshed”, “ULTRAVIV recovery infusion delivers anti-nausea medication, pain reliever, vitamin B-12 and an energy booster, this IV is best for those recovering from illness, hangovers or jet lag“. (underlining added) The infusion “ROYAL FLUSH” combines ULTRAVIV and MEGABOOST.

Is there any basis to these claims or is this pseudoscience at its worst? Even if the substances in these drips are 100% available in the blood, this does not necessarily mean that they will be more effectively used by the body than if they had been absorbed through the stomach. It also does not mean that any unneeded or unused substances will not be excreted in the urine. As ULTRAVIV costs R1499 a drip (as of 29 November 2015) – this could lead to very expensive urine!

According to the South African Medicines and Related Substances Act, all injections (unless listed elsewhere in the Schedules), are included in Schedule 3. These products therefore have to be prescribed by an authorised prescriber, and should be administered under medical supervision by a person suitably qualified to do so – and within the scope of practice of that registered person.

Here are two newspaper articles focusing on these kinds of products – the first a local one; the other, from abroad (both as fair use).

The second article mentions reviv, and refers to the same website as Reviv SA does. However it focuses primarily on a different “commercial IV treatment facility” called “IVme hydration clinics” based in Chicago, USA.

In one of the trademark information sites, we are told that the classification statement for ULTRAVIV is: “Intravenous bags sold filled with vitamins, anti-oxidants, electrolytes and medications; intravenous fluids used for rehydration, nutrition and the delivery of pharmaceutical preparations; liquid nutritional supplement; nutritional supplement for eliminating toxins from the body.” (underlining added) 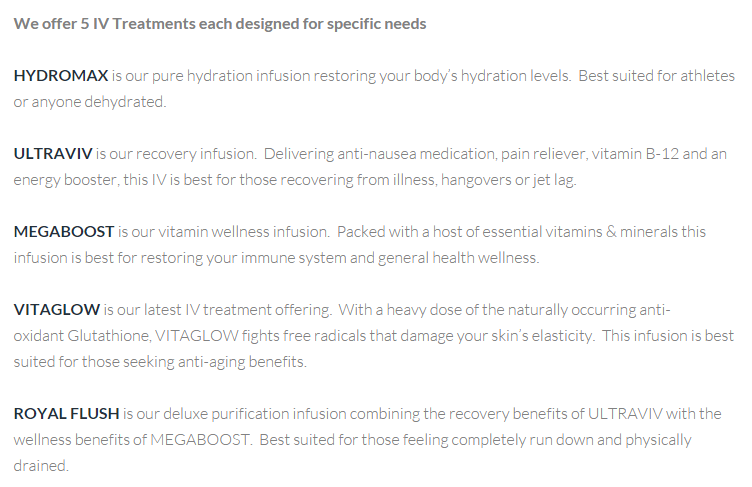 We do not know the concentrations of the vitamins, anti-oxidants, or electrolytes in these products; or whether they comply with the call-up for registration of vitamins and minerals, Notice R.837 dated 28 October, 2014. The applications to the MCC for registration should have been submitted by the end of April 2015. It is unknown whether or not this company complied. They cannot claim, in South Africa, that these products are “nutritional supplements” or foodstuffs in terms of the Regulations to the Foodstuffs, Disinfectants and Cosmetics Act.

The Time article identifies the anti-nausea medication in the “IVme” version of the hangover treatment, as ondansetron, and the pain reliever as ketorolac. We do not know if reviv’s ULTRVIV formulation contains these medicines, or different ones.

Ondansetron is registered for use in South Africa for: nausea and vomiting induced by cancer chemotherapy and radiotherapy; or, prevention and treatment of post-operative nausea and vomiting; – not for hangovers. In rare cases it can lead to serious adverse effects such as anaphylaxis, or QT prolongation – both of which can be fatal.

If ULTRAVIV and ROYAL FLUSH  contain ondansetron, we  can only wonder if the reviv wellness “clinic” has the necessary emergency equipment to resuscitate someone who has such reactions.

Ketorolac is registered for use in South Africa  for short-term management of moderate postoperative pain, not hangovers. There are multiple possible serious drug interactions with ketorolac, including with lithium, warfarin, and angiotensin-converting enzyme (ACE) inhibitors. Pregnant and breastfeeding women should not use ketorolac.

In South Africa, both ondansetron and ketorolac are Schedule 4 substances according to the Medicines Act.

Because none of the reviv range has been registered, and therefore had their quality verified by a South African regulatory authority (let alone safety and efficacy), we can only take the word of the sellers/marketers/suppliers/distributors of the products that they were manufactured according to current good manufacturing practice (cGMP), are sterile, and do not contain any impurities. Delivering unidentified impurities intravenously could be highly detrimental to the recipients.

Wealthy hooked on treatment that drips with controversy

But they come at a price.

He said the drips put vitamins directly into a client’s veins, bypassing the digestive system, where some vitamins get lost.

Clients at the clinic include a high-level businessman and a small-town KwaZulu-Natal mayor who had a drip party at his house with friends and family.

According to Mia, one drip is for hydration while the others offer a mixture of vitamins and amino acids and glutathione to boost energy, vitality, skin tone and offer “wellness”.

But some doctors are sceptical.

Evidence has mounted in recent years that vitamins offer no health benefits, do not improve life expectancy and could even be harmful.

“Only people actually diagnosed with deficiencies should take vitamins – in general vitamins, IV or oral, are toxic and increase mortality,” said Richards.

“No supplement, including vitamins, has any health benefit.”

Breaking the skin can lead to infections and air embolisms can occur if the drip has an air bubble.

Drips can also cause inflammation of veins.

Research published in Annals of Internal Medicine found vitamins had no effect in preventing major diseases or lengthening lifespan. It concluded that vitamins could be harmful.

Mia countered that, after 50000 treatments since Reviv started operating, there had been no adverse effects.

Vitamin drips should, according to the Medicines Act, be administered based on a script but the Reviv clinic provided a Times reporter with a drip despite the fact that she did not have a script.

From the National Post: Hooking up to an IV drip is the latest health fad, but critics say there is little proof it works

From Time: Hook Me Up: Are IV Clinics for You?