Despite the strides made in legislation protecting consumers against bogus herbal miracle cures and other quackery, one can still find any number of products claiming to treat life- threatening illnesses.

Freely available online and lining the shelves of big-name pharmaceutical retailers, some of these health brands claim their products cure diseases such as diabetes and heart disease.

What irks Dr Harris Steinman, a long-time public opponent of health supplement scams, is that this industry is only getting bigger and the actions of its operators more nefarious.

Steinman, who edits quackery debunking website CAMCheck, raised the alarm on a brand which has repeatedly been on his website, its supplements supposedly being the key to warding off such ailments as arthritis.

Supplement brand Immunadue has bumped heads with the Advertising Standards Authority – which, in 2016, ruled against a radio advertisement in which it made bold statements about health science and its products.

The multivitamin-maker is one of the more successful of hundreds of South African companies that jumped on the “optimal body pH level” bandwagon. 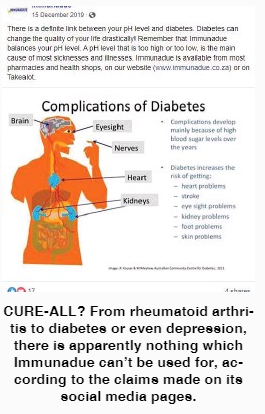 It told its audience in the 2016 commercial the optimal pH for the human body was 7.2 and its pills would assist to achieve this state.

It also claimed a lower or higher pH made people vulnerable to diseases such as cancer, arthritis and diabetes.

The complainant, Dr Arial Eyal, contended that Immunadue made false claims in the advert, including that the product would normalise the body’s pH levels.

He said the company incorrectly quoted the optimal pH level and mentioned that the product had been clinically proven, all of which was untrue and contradicted by medical journals, according to Eyal.

The ASA ruled that the claims made in the advertisement were currently unsubstantiated and upheld the complaint.

But the founder and director of Immunadue, Schalk Mulder, insists his product is no snake oil, and swears his customers would attest to the numerous health benefits of his supplements.

“If you have got clinical trials on the raw material of your product saying that it can help with diabetes, stress and so forth – and there are a lot of products which are extracted from the same active ingredient patented by all of these firms to help with diabetes and so forth, then according to me, it’s not a false claim,” says Mulder.

“We have clinical studies that say it does work and we have been on the market for 18 years.

“We have so many testimonials from satisfied clients who say our product does work.”

Steinman, a lauded consumer rights activist in the health industry, says companies that claim their products treat multiple illnesses are largely unscrupulous and misleading in their wording.

After perusing Immunadue’s claims on its website, Steinman concluded that none of the claims made about this product’s health benefits could be true, and he added the pills could even be dangerous.

“They appear to making the claims based on the ingredients being ‘herbal’ and some having ‘traditional use’, but there is no robust evidence that any of these ingredients together have any of the claimed effects.

“There is some preliminary evidence for or against some of the ingredients, but based in cell cultures and not proven in humans.

“One has to prove that the combination of ingredients work and that the dosages are correct. Also, that they are safe.

“For example, African wild potato products have been associated with decreased production of blood cells and irregular heartbeat.

“It may interfere with the effectiveness of other drugs or supplements, such as antiretroviral drugs.” – co.za