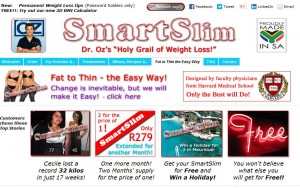 SmartSlim is another scam brought to you by Adam Turner of TopSlim. The website looks the same, the images are almost identical, as are the claims and ingredients.

We have previously pointed out that there is no evidence that Topslim works, and worse, that Adam Turner, the owner, had lied about the evidence that “experts” support his product. There has also been an ASA ruling against the product and its claims (and the owner ignores this ruling).

A visitor to CamCheck has brought to our attention that The pictures of the testimonials come from a Russian site
http://sveta.russianblogger.ru/2010/04/inna-volovicheva-dieta.html Tanika Taylor from Kroonstad is actually Inna Volovicheva.

A complaint was laid against the weight-loss claims of TopSlim. TopSlim also claimed to be supported, endorsed, or was based on the research of three professors. The advert claimed, among other:

The complainant added that he has contacted the three experts identified in the advertising. Professor Stohs has come back to deny any knowledge of this product or the implication that he in some way endorses it.

TopSlim did not respond to the ASA and the ASA ruled against the advertising. The original complaint is posted at the end of the ASA ruling.

TopSlim have advertised in newspapers, and on their website, claiming among other: