You are here: Home › Health Information

By Harris on 27 December, 2016 in Health Information
Continue Reading 0

“If you don’t know who Mike “Health Ranger” Adams is, he may be a steadfast presence in your social media newsfeed without your knowledge. Awarded the top slot on Real Clear Science’s “Worst Websites for Science in 2016” list, and with its founder touted by Dr. Oz as “the Renegade Health Ranger,”  Natural News is a thorn in the sides of all who hold legitimate science dear.  But bad science isn’t Adams’ only offense. Natural News is a fake news fixture, with articles on Obama birtherism, HIV/AIDS denialism, and the Sandy Hook tragedy as an elaborate hoax by FEMA to promote gun control. With the current uproar about fake news, the website and its founder should top lists of spurious sources.”

Now, dozens of science supporters (including me) have launched a grassroots New Year’s resolution campaign against both Adams and his website, tagged with
… Read the rest
Continue Reading 0
By Harris on 24 December, 2015 in Health Intelligence Magazine
Continue Reading 0

Health Intelligence Magazine (HI), a publication of Solal, then CAVI Brands, now Ascendis Health – and often mentioned in CamCheck – will no longer be published. See the “farewell” in the picture below. 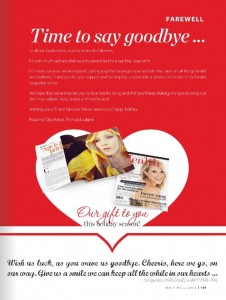 One of the CamCheck postings was by Kevin Charleston, who wrote: “The irony is that the magazine Health Intelligence is itself a disguised marketing programme for Solal Technologies, a company that actively promotes pseudoscience and aggressively attempts to shut out valid criticism of its advertising.” For this, Solal instituted a High Court action in 2012 against Mr Charleston suing him for R350,000, as reported by GroundUp. Solal has not backed away from this action and it remains on the roll of the High Court despite it being clear that the magazine was at that time, a disguised marketing program for Solal.

This interesting article, Reporting on quacks and pseudoscience: The problem for journalists, written by Michael Hiltzik and published in the LA Times, highlights the problem that journalists face: do they give coverage to obvious quacks?

Recently, we raised the question of how political journalists should deal with candidates for president who mouth the quackery of climate change denial. But the problem of how to write about pseudoscience goes much broader.

In part that’s because quack science has penetrated so deeply into public discourse — witness the huge audience tuning in to the egregious Dr. Oz. There’s also the impulse of journalists at major news organizations to give all sides of a question equal play, regardless of their credibility.

But last week Keith Kloor of Discover Magazine and Julia Belluz of Vox, in similar articles, examined yet another ethical issue: How to report on popular

In Solal’s latest issue of Health Intelligence Magazine (their vehicle for deceptive advertising), an article written by Tamzyn Campbell (a dietitian, and sister of Solal’s head pharmacist, Brent Murphy), reviews the book written by Prof Robert Lustig and claims that this is “probably the best book of our time explaining the obesity epidemic and exploring the link between diet and health”. The article is highlighted on the cover as “Toxic Sugar”, and within the magazine as “Fat Chance”.

We have previously pointed out that Solal uses pseudoscience in order to promote their products. Solal have had ASA rulings against their claims for sugar but this has not have any impact on reigning in their pseudoscientific approach to evidence and science. Solal are great admirers of Prof Robert Lustig and hence promote his views that sugar is toxic with zealousness. We do not argue that … Read the rest

What do Solal and Dr Auer’s Base Powder have in common? Two things: both flagrantly ignore ASA rulings, and, although the ASA ruled against the claims being made for this product in 5 September 2003, they are making the same claims in the July-August 2013 issue of Solal’s Health Intelligence Magazine (Edition 22). Then we know that Solal cannot be trusted – either their science or their ethics. Indeed, in the same issue is an advert for Solal’s Breast Protection Formula with the line “there are nutrients and plant extracts that can help protect your breasts…”, yet they could not prove their claims with the ASA ruling against the claims being made for this product.

From The Slate, in an article titled Dr. Oz’s Miraculous Medical Advice – Pay no attention to that man behind the curtain, by Julia Belluz and Steven J. Hoffman.

Dr Oz then told his audience about a “breakthrough,” “magic,” “holy grail,” even “revolutionary” new fat buster. “I want you to write it down,” America’s doctor urged his audience with a serious and trustworthy stare. After carefully wrapping his lips around the exotic words “Garcinia cambogia,” he added, sternly: “It may be the simple solution you’ve been looking for to bust your body fat for good.”

The miracle cure isn’t really a miracle at all. It’s not even new. Garcinia cambogia has been studied as a weight-loss aid for more than 15 years. A 1998 randomized controlled trial looked at the effects of garcinia as a potential “antiobesity agent” in 135 people. The conclusion: The pills

ASA ruling: “Given the above, the complaint at hand cannot currently be properly considered and ruled on.”

ASA ruling: “Given the requirements for clear and concise grounds in the Code, and in keeping with the approach followed in the Nature’s Choice ruling referred to above, the Directorate has to decline to rule on the merits of this matter at this time, based on the complaint at hand.”

Health Intelligence magazine states on its front cover as a byline: “The Science of Health.” In its advertising blurb on its associated company Solal Technologies’ website, it is stated to be “Sophisticated. Cutting edge. Credible.” The editorials in Edition 15 (May 2012) are however misleading, and disturbingly so.

The first [text] editorial by Colin Levin bemoans the new food labelling regulations from the Department of Health as having gone too far “[i]n their noble intention to prevent (sic) consumers from misleading claims.” He even quotes the Health Products Association of South Africa (HPA) which is “disappointed” that the regulations don’t address the relationship between certain food (sic) and various diseases.

So what’s the problem?

If Mr Levin and/or his editorial team … Read the rest