You are here: Home › Cancer

It is important to try to read an article like this with an open mind – and then formulate your opinion. Are the claims true, exaggerated, or devoid of truth? We are posting it simply to highlight a topical issue.

“Research from Alberta, never before publicly reported, suggests that at least one in every 100 breast-cancer patients rejects standard care and doubles her likelihood of death as a result”.

“There is no systematic, national tracking of the phenomenon, but apply those findings to everyone newly diagnosed with cancer, and they suggest almost 2,000 Canadians are exposing themselves to similar risk every year”.

Read the article at the … Read the rest

The Cancer Association of South Africa (CANSA) has given their “Smart Choice” Seal of Recognition to the product Omega Caro-E. CANSA claims not to “endorse products, but ‘awards its’ Seal to certain products”. This is disingenuous for this is after all, still a form of endorsement. And, as they demonstrate on their website, they are given the authority to do so by the Department of Health.

CANSA invited media and health professionals to a launch of their awarding of the “Smart Choice” Seal of Recognition to Omega Caro-E. The invitation stated that the product “can assist with reducing the risk of cancer and other noncommunicable diseases like diabetes and heart disease.” Prof Roy Jobson (Pharmacology, Rhodes University) wrote a letter to the CEO of CANSA, Ms Janse van Rensburg, asking for evidence that these claims were supported by scientific evidence, … Read the rest 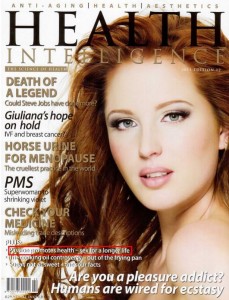 (Note: The highlighting box has been added.) On page 20 the article has the title: "Sex, so necessary for positive health: sex is a buzzword that defies trendsetting and social mores, staying top of mind and tip of tongue" and is written by Kirsten Alexander.  It is seemingly supported by 12 "scientific references" .

The Solal Technologies website Health Intelligence includes the following "product information": "Health Intelligence goes further and deeper [than other health magazines], because our focus falls squarely on the facts. Health Intelligence offers breakthrough science, enabling you to better protect your health. Thoroughly researched and using only the latest, peer-reviewed studies by leading international and local experts, Health Intelligence articles are not only credible, they are revolutionary, all the while offering life-enhancing … Read the rest

One of the cardinal sins of any researcher is to tamper with their data to make them ‘fit’ the results they were wanting. A recent international example is that of Dr Andrew Wakefield, who published articles in the reputable Journal ‘The Lancet’, which apparently showed a causal link between the MMR (measles, mumps, rubella) vaccine and autism. Fortunately his deception was uncovered; he was struck off the roll of the General Medical Council in the UK; and The Lancet retracted his articles. The tragedy is that many people did not have their children vaccinated because of this deception, and a number of these unvaccinated children went on to develop measles and some even died. Others may have to cope with the consequences for years to come.