You are here: Home › ARHIA

This is a statement by the South African Association for Responsible Health Information and Advertising (ARHIA). It has been released on the 10th anniversary of a notice in the government gazette that has undermined the scientific governance of medicine in South Africa. 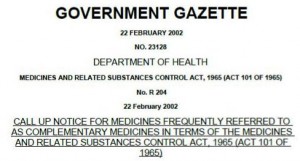 
Wednesday 22 February 2012 marks the tenth anniversary of the call up of "medicines frequently referred to as complementary medicines". This "call up" initiated by the Medicines Control Council (MCC) ten years ago was intended to be an audit of the complementary medicines market over a six month period, but its unintended consequences have resulted in a ten year deluge of dubious and unproven products to the detriment of people living in South Africa.