By Harris on 12 September, 2017 in Laetrile
Continue Reading 0

DIY medicine can have serious consequences.

The man in this case was making his own extract, and consuming two teaspoons of it daily, in addition to taking a commercial fruit kernel supplement called Novodalin. He had had prostate cancer, which had gone into remission.

“The gentleman involved has a scientific background and he had read that apricot kernel extract would prevent his cancer from recurring,” his anaesthetist, Alex Konstantatos, told The Huffington Post.

Apricot kernels have been widely publicised as a miracle cancer cure on and off since the 1950s. They contain a compound called amygdalin, which can be partially synthesised into laetrile.

When we ingest amygdalin or laetrile, our digestive bacteria and food enzymes break them down into cyanide, … Read the rest 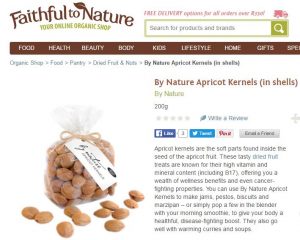 Faithful to Nature are selling apricot kernels with the claims that “These tasty dried fruit treats are known for their high vitamin and mineral content (including B17), offering you a wealth of wellness benefits and even cancer-fighting properties. You can use By Nature Apricot Kernels to make jams, pestos, biscuits and marzipan – or simply pop a few in the blender with your morning smoothie, to give your body a healthful, disease-fighting boost. They also go well with warming curries and soups”.

Update 06 May 2016: It appears that this product has been removed from the Faithful to Nature website

Earth Products also sell this product, making spurious claims, such as “The Hunza people are considered living proof of the health benefits of apricot kernelsBased in the remote Himalayan region near West Pakistan, they are traditional apricot farmers and are believed to consume … Read the rest