You are here: Home › academic1

On 15 November 2013 the Minister of Health finally published Regulations to the Medicines Act (Medicines and Related Substances Act, 1965 (Act 101 of 1965), not for comment, but for implementation. They defined complementary medicines for the first time in South Africa. In addition the Regulations incrementally “called up” various complementary medicines over the following six years.

If a product that has been called up, and has not been registered, or an application for registration has not been received by the MCC, then according to the Medicines Act (Section 14(1)) it may no longer be sold.

The Regulations also created a new category of medicines – category D – which are complementary medicines “subdivided into such disciplines as may be determined by the Council after consultation with the Allied Health Professions Council of South Africa.”

This is an invited article by a guest author who points out a discrepancy between the 'talk' and the 'walk' so often demonstrated by dedicated sellers of complementary medicines.

Compare the claims made for Supreme Slim and Simply Slim.

This post refers to a claim made by Procydin in 2009, but only posted now for posterity.

This product claimed on its label: “Helps prevent your body from rusting away” 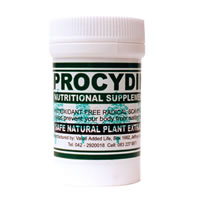 This is extremely misleading as there is no part of your body that can “rust”. When a metal is exposed to water and oxygen, a chemical reaction called  oxidation takes place which causes corrosion. When this takes place with iron, it results in a reddish-brown discolouration which may flake off and is known as rust.

Oxidation can also occur when a fruit such as apples or bananas are exposed to air, and they develop a brownish discolouration.

Inside the body “oxidation” is said to take place when a transfer of “free radicals” occurs. This is not the same thing as “rusting”. Normally the free radicals (another name for unstable electrons) attach themselves to any molecule nearby which is able to … Read the rest