You are here: Home › Harris

In a ruling dated 28 November 2006, the ASA ruled against the USN’s print advertisement for its “Cellu-Firm” product. In a letter dated 26 February 2008, a consumer argued that USN is in breach of the original ruling as it continues making misleading statements about the product on its website.

The ASA ruled in favour of the complainant.

This Clicks advert promoting this USN product continued to infer that this product could reduce cellulite in spite of the previous ASA ruling. A breach complaint was laid with the ASA. USN responded with “The current advertisement displays certain products available at Clicks, and only shows the packaging of the product in question. No claims are made about this particular product. The respondent submitted that it did not supply Clicks with the image used on its broadsheet advertisement. Clicks designed and published its own advertisement with an old image. In addition, the respondent has changed its own advertisements, images and labels, and informed Clicks about the implications of the previous ruling”.

The ASA concluded that: “The breach allegation is accordingly dismissed. The respondent is, however, cautioned that third party retailers should be alerted to the import of the ASA ruling. Should further, similar, breaches occur, the contents of this … Read the rest

This ASA ruling was made in November 2006. USN claimed that Cellu-firm “to be effective for cellulite”. The complainant pointed out that the active ingredient is Centella asiatica, a synonym for gotu kola, and that Natural Medicines Comprehensive Database, the “Scientific Gold Standard for Evidence-Based, Clinical Information on Natural Medicines” had NO indication that this ingredient has ANY efficacy against cellulite. 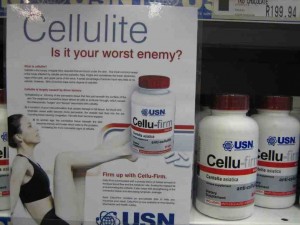 The ruling is posted, followed by the complaint.